Past Shows and Events

Directed by Boulevard Theatre Artistic Director Mark Bucher, this two-person comedy showcases the talents of local Milwaukee performers David Flores as “Lionel Percy” and Carole Herbstreit-Kalinyen as “Maude Gutman.”  MIST is set in a rough and tumble trailer park home in Bakersfield, California, in the cluttered living quarters of ex-bartender Maude Gutman, who believes she has inadvertently purchased a rediscovered masterpiece by the acclaimed abstract artist Jackson Pollock (1912 – 1956).

The action (and comedy) is unveiled when renowned art critic Lionel Percy arrives at Maude’s trailer to either authenticate the painting as a lost Pollock or to quickly dismiss it as a fraud.  In the Boulevard Theatre’s enhanced presentation, Milwaukee actor David Ferrie will read the necessary stage directions for Sachs’ indictment of high-end art, art criticism, and the folly of placing more value on art than on people.   In the Boulevard’s skilled hands, concert readings are transformed from staid recitations into emotionally affecting performances that that occasionally incorporate the scripts (placed on music stands) in front of the actors.  Boulevard actors showcased in enhanced presentations familiarize themselves with the various texts to an “near-memorized” level, so they only seldom refer to the printed page.

Past concert readings (November 2018’s critically-acclaimed Wisconsin premiere of Terrence McNally’s powerful drama MOTHERS AND SONS is just one extremely successful example) have received impressive reviews from both Milwaukee critics and local arts bloggers.  Milwaukee’s Shepherd Express cited Boulevard’s MOTHERS AND SONS as “an LGBTQ Masterpiece Everyone Should See” while other art bloggers and theatre writers praised the quality of the acting and noted that the scripts “disappear” just moments after the performance began.

Boulevard patrons have shared enthusiastic reviews for a concert presentation’s unique ability to intimately yet directly put forth a play’s themes and emotions.  In Boulevard’s heightened distillations of plays (via concert presentations), an author’s creative intentions are immediately received by the audiences in a manner that is not possible within the standard production process.  Sets, costumes, and expensive production values are quite helpful in presenting spectacles or splashy musicals, but can very often compete with characters’ emotional exchanges and impede the power of the playwright’s words – especially in today’s smaller cast plays.  Patrons commented at nightly MOTHERS AND SONS’ talkbacks that “they could not imagine seeing the play any other way” and “this treatment was more engaging than the Broadway production!”

This clever and affecting 90-minute Milwaukee premiere of BAKERSFIELD MIST was be presented in an identical mode as MOTHERS AND SONES.  Performances took place at the Plymouth Church (2717 East Hampshire, one block east of the intersection of Downer & Hampshire).   Plymouth is conveniently located just east of the University of Wisconsin-Milwaukee.  Neighborhood (street) parking is available.

Also, please note that this concert reading is ideal for fundraisers for visual arts groups, galleries, and other arts-centric organizations, as well as LGBTQ – focused groups, due to the strong LGBTQ sensibility found within the dialogue and narrative, either within the scheduled list of shows (below) or later in the season.  Concert readings are enjoyable, low-tech, and portable – consider hiring the Boulevard Theatre for your next event, fundraiser, or presentation.

Here is a complete list of the performances and curtain times.

Milwaukee’s premiere alternative theatre, the Boulevard Theatre opens its 33rd season by staging the MILWAUKEE PREMIERE of acclaimed LGBTQ playwright Terrance McNally’s powerful drama MOTHERS AND SONS (Thursday, November 15 through Sunday, November 25, 2018).   All performances of this enhanced concert reading (90 minutes, no intermission) occur in the Plymouth Church’s intimate  (second floor) Graham Chapel.  Plymouth Church is located at 2717 East Hampshire, one block east of the University of Wisconsin-Milwaukee campus, just off of the intersection of Downer and Hampshire.  For more information per Milwaukee’s Plymouth Church, please visit their website  (http://www.plymouth-church.org/home) or their Face Book page(https://www.facebook.com/plymouthchurchmke/).
At turns funny and yet emotionally moving, MOTHERS AND SONS portrays an older widow (“Katherine,” played by Joan End) who pays an unexpected visit to the New York apartment of her late son’s partner (“Cal,” played by Mark Neufang ), who is now married to another man (“Will,” played by Nathan Marinan).  This very special concert reading is an enriched artistic experience, through a much more expansive rehearsal period typically enjoyed in a standard stage reading.  Also, a significant majority of the script will be memorized by the artists, unlike a true, mere “reading.”  And some physical movement (”blocking“) will be incorporated into the performance.  The necessary stage directions will be narrated by actress Pamela Stace and this dynamic concert reading is directed by Mark Bucher.

Thursday, September 21 through Sunday, October 8, 2017, at the Plymouth Church.

Three worlds collide in a small (unnamed) town in this NATIONAL premiere of a new play by acclaimed Canadian playwright Daniel MacIvor. This trifecta of delight tells of three women who have each built a wall around themselves and who also each desire to overcome these self-imposed barriers.

THE PLOT: A well-off, retired educator (“Patricia,” played by Christine Horgen) moves to a grand house in a small town and hires a local housekeeper and companion (“Birdy,” played by Donna Lobacz). “Birdy” is a widow from the poor end of the same street. Polar opposites in personality and circumstances, their uneasy relationship becomes strained when Patricia takes an interest in Birdy’s daughter (“Dell,” played by Nicole Gorski), even as her own health declines. Dell is a single mother of two small boys, one of whom now wants to be addressed as a girl (“Alice”). To add to Dell’s challenges, circumstances have forced her to move back in with her opinionated mother. SMALL THINGS is a daffy, delightful, and delicate exploration of how it’s really just small things that can keep us from understanding and accepting each other.

Boulevard Theatre has won critical raves for its recent previous productions in Plymouth Church’s second-floor Graham Chapel space, including Eugene Ionesco’s linguistic farce THE BALD SOPRANO and John Murrell’s stirring TAKING SHAKESPEARE. Graham Chapel’s warm, cozy environment enhances an intimate connection between performer and patron and the limited seating (45 patrons) fosters a sense of community for all participants. For more information about Plymouth Church, please visit www.plymouth-church.org . SMALL THINGS ticket prices range from $10 -$20. Tickets, if available, will also be sold on the day of performances, but ONLY at the door (cash only). Deeply discounted (but obstructed) seating may also be offered for any sold-out performances, as well.

Patrons may call Boulevard’s 24-hour voice mail at 414-744-5757 or visit the theatre’s website @ milwaukeeboulevardtheatre.com for further information on this artisan-crafted comedy.

PLEASE NOTE: Boulevard Theatre is an all-volunteer organization and its ability to maintain a wide variety of social media offerings on the most timely basis may be tempered by a lack of consistent volunteers and funding challenges. Your patience, your support, and your understanding is extremely valued. If you have not noticed, these are challenging times for small nonprofits and alternative arts organizations are most especially affected. Please consider supporting our mission through your generous support and/or volunteering. Thank you

Boulevard Theatre presents a concert reading of the cherished musical

musical adaptation of Jean Giraudoux’s comedy THE MADWOMAN OF CHAILLOT is presented at Plymouth Church. This melodic masterpiece

tells of three colorful Parisian “madwomen”(the Countess Aurelia and her friends Constance and
Gabrielle) who cross paths with an oil conglomerate who plans to blow up Paris, as oil has been
discovered beneath its streets! Countess Aurelia went mad in her youth (because of a broken
heart) and is now known as “The Madwoman of Chaillot.” Aurelia strives to eliminate the evil corporation
– and its executives! Will the corporation be defeated? Will idealism and love triumph over greed and
materialism? Attend and fnd out!
Director/actor David Flores will stage the DEAR WORLD concert reading and Donna Kummer will
serve as music director. Flores and Kummer shared these duties for Boulevard’s acclaimed 2014 staging
of Rodgers & Hart’s musical PAL JOEY and the 2016 SMASH hit tribute to Milwaukee, WHERE THE
STREETCAR BENDS THE CORNER, DOWN BY THE ZOO! These shows enjoyed overfowing houses and
won notable critical acclaim. And both showcased LOCAL artists.
A concert reading of a musical means a modern dress, script-in-hand but fully acted performance

(accompanied by piano and staged efficiently) and is an excellent way to experience the best, rarely-
produced works of the American musical theater. This “stripping-down” can result in a new, exciting
vision of a neglected, older work.

Appearing in the leading role of “Countess Aurelia” (a role that was played by Angela Lansbury) is
esteemed actress, singer, and cabaret artist Liz Norton, who won notice for her witty portrayal of “Melba”
in the Boulevard’s concert staging of PAL JOEY. Some of Milwaukee’s most talented and appealing
performers complete the cast, including: Julie Alonzo-Calteaux, Zachary Dean, David Ferrie, Julianne
Frey, Joseph Gallo, Paula Garcia, and Chad Larget. 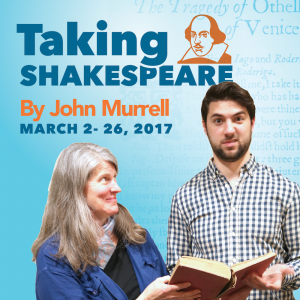 Fresh off the theatre’s smash October hit of Where the Streetcar Bends the Corner, which wowed hundreds of patrons at Milwaukee’s Plymouth Church, Boulevard staged this Wisconsin premiere in the cozy confines of Plymouth Church’s second-floor Graham Chapel Hall.

TAKING SHAKESPEARE is a shrewdly written theatrical tutorial that revolves around the unlikely pairing of a disillusioned literary professor (“Prof”) and a slacker student (“Murph”), who is obsessed with video games. Murph is the son of the dean of humanities at a small unnamed university. Despite being highly intelligent and having his own set of fresh ideas, the young man is barely passing his courses and shows little interest in his studies. In an attempt to motivate him, his mother sends him to be tutored by her former mentor, the “Prof,” at the burned-out instructor’s apartment. However, “Prof” has come to her own dramatic crossroads. Depressed and disillusioned with her life, she barely functions and has little interest in teaching the cocky young man — or any other student.

But when Murph reveals that in order to pass his English Lit class, he must demonstrate a thorough understanding of Shakespeare’s classic Othello, his reluctant tutor appears strangely thunderstruck by the assignment of this literary portrait of jealousy and regret. The cause for her intellectual paralysis only becomes apparent later in Murrell’s affecting narrative. “Prof” is Murph’s last chance at passing the course and staying in school and he is her last opportunity to retain her position, and her tenure. This unlikely pair begin an uneasy emotional journey together as–together–they work through the famous tragedy of Othello. Along the way, they timorously begin to understand the tragedies in their own lives as they deal with university politics, parental manipulation, regrets from the past, and the uncertainty of the future. The playwright dovetails Shakespeare’s tale of treachery, ambition, and betrayal alongside our modern issues of anti-intellectualism, academic oppression, and cultural malaise with an adroit humor and piercing wit. The artistic result is emotionally affecting, socially troubling and very entertaining.

Milwaukee artists Amy Callahan and Jake Konrath appeared as “Prof” and Murph respectively. Ms. Callahan has appeared previously with the Boulevard in Edward Albee’s thorny matrimonial delight, Counting the Ways. She has also appeared with other local companies in such varied pieces as Conor McPherson’s The Weir and John Murphy’s The Country Boy. Mr. Konrath has appeared with Voices Found Repertory Theatre (Coriolanus) and the Sunset Theatre (How to Succeed in Business, Without Really Trying).

Noted local actor, director, and playwright David Flores co-directed Taking Shakespeare. Flores, a powerhouse of talent, lent his classical finesse to staging Murrell’s “classy comedy.” Mr. Flores is well-known to both Milwaukee audiences and local theatrical media, having performed with a majority of Milwaukee’s cornucopia of theatre companies (Skylight Music Theatre, Off The Wall, Windfall Theatre, etc.) as well as portraying leading and key roles in Shakespeare (“Shylock” in The Merchant of Venice, the title role in Richard III, “Parolles” in All’s Well That Ends Well, etc.).

The comedy showcased new and returning actors and was staged in a clean, simple style that illuminates the play’s luxurious language and concentrates on the author’s delicious dialogue.